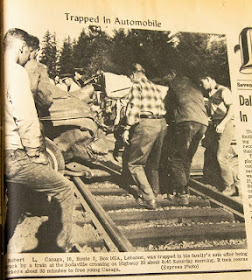 As I began to visualize the world again I was far above the earth, then closer, above the wreck. I could see the cars, the train, all the people standing around, and the ambulance. I could see ALL of this at once, not the normal vision but as through a  360 fisheye lens.
I began to get closer and felt the pull of the thread of energy holding me to my shell and I was pulled down into my body.
I opened my eyes and saw white. I could feel the sheet so I lifted my right hand and pulled the sheet off. People screamed. A woman fainted. They were all trying to get my mom out of the car and had pronounced me dead: no breath, no pulse, no blood coming out of my right hand. I had a huge piece of glass between my thumb and finger and when I came back it started bleeding.
The train coupler had pushed in the door and I was under it. The door was wrapped around me and I was between the knuckle of the coupler and the train.
To say that people were animated and excited would be understating the event. Once they got mom out they were faced with the problem of getting the train off me.
The door had wrapped around my lap and pushed me down in the seat leaving only my head and right arm exposed. Gas was everywhere.
They could not figure out what to do. Keep in mind there were no jaws of life back then. They contemplated jacking the train up but gave up on that idea fast. I listened to the conversations and finally yelled at them to "get this fucking train OFF me!" I told them to get the tie-down chains of the Rose Logging truck (the truck was 300 feet down the road and hidden by the train so I could not possibly see it but I even knew whose truck it was) and tie the car to the tracks and back the train off. They decided that would work and secured the chains to the car and the cross ties. One guy asks "What about your legs?" I said, "What are you going to do, hurt me?"

The train backed up and the sound of metal on metal was a slow scream as the coupler again pushed down on me. My legs were bent backwards and I watched as the door released and sprang open. My legs popped up and my left arm, now exposed, was pretty damaged and torn up. There was a small cut above my left eye that was bleeding hard. They cut away the door and the seat braces to get me out. The whole operation took about 30 minutes.
They came around to the other side of the car and lifted me out and on to a gurney.  On the way to the hospital, I floated in and out of my body a few times.
While this was going on, the State police had gone to Bill Canaga Tire Shop and ask my dad if he knew a John Canaga and that a car belonging to him had been in a train crash and the boy in the car was dead. My dad's name was John William Canaga, Bill Canaga to everyone. He flew to the hospital and found my mom in a coma and as he was talking to the Dr. they wheeled me in. I sat up and ask about mom. I don't think I ever saw my dad cry before or after that.
They told me I would not be able to walk for a few months as my legs were in bad shape, having been bent backwards, but no tendons tore loose and nothing was broken. That night I rang for a nurse, gave up, and finally got out of bed and dragged myself to the bathroom. I was able to stand balanced on my legs for just a few seconds by holding the railing. I followed the railing along the wall of my room and then out in the hall. I pulled myself around the hall for about an hour balancing and falling but the next morning I was able to walk with crutches. There was no internal damage amazingly, so on Monday night, they let me go home.
KGAL radio had announced my death just after the wreck and so I was "dead" all day Saturday till my dad, having called the station and tried to tell them I was fine, only to be hung up on as a crank caller, drove out there and beat on the door and told them in person. At 11:00 they called the hospital and got the story right. But, the damage had been done so Tuesday when I went back to school, lots of people, including a few teachers, were very surprised.
My first-period teacher, Paul Brown, was quiet and reserved that Tuesday morning, my first day back. When he called roll he said Callahan and paused, the went on to Crane. I spoke out and said, "you forgot me".
He turned white (he was already white) and started crying. "I saw you but I knew you were dead!"
The next few days were equally odd. When I came around corners in school people would drop books and even faint in a few (three) cases.

Years later, in 1994, I was scheduled for surgery at the Portland VA hospital. August 8th at 8:00 am.
As one Dr. put it, "Three hours into two-hour surgery things started going bad".
They were performing a laparoscopic operation to create a stomach valve so I would stop having heartburn. My thorax spasmed and collapsed and the tools were still inside me.
I was again in the same place as before and was surrounded by energy, then I was pulled back. They inflated me and finished the operation not knowing that the tools had punctured the bowel and the plural.
I was given a small pillow to hold against my stomach as I sat in recovery. I kept breathing out but not being able to breathe all the way in. This went on for a long time and I complained but was told I was fine and it was normal. As I took my last breath I listened to myself flat-line, got up and watch as they threw me on a gurney and ran down the hall trying to get me to breathe. I was again back to the realm of pure energy but also floating above myself, watching.
They threw me one to a bed face down and put two huge needles up my back into my lung cavity and drew off the grey fluid, then turned me over and one of the doctors straddled me and took a scalpel and cut me open between my 5th and 6th rib on the left and used a rib spreader to insert a tube. I woke up as he was making the first of four cuts. I screamed and bent the bed rail down. They put three tubes in two on the right and one on the left, attached me to a vacuum machine and three months later, after giving up trying to fight the infection, operated again and removed my lungs, cleaned me out and put them back.
I was told by the Dr. who did the operation that he was good but that I should call my friends and say goodbye just in case.
I left the hospital a few weeks later weighing 160 pounds, down from 230 when I went in.

All this makes me know that I am forever connected to that place of pure energy, as if tethered to it by some strand, always connected and safe.
I am there all the time, as I am here.

I have referred to these events as a near-death experience but they were not, it was death.
I spent a great deal of time surrounded and engulfed by the most positive and perfect energy, by the energy of all the souls ever to have lived and that was living and that would ever live. There is no time and space, simply "all". Everything that had ever happened to me and ever would happen to me was there with all the possible paths from start to return and the feeling was overwhelming. When I decided to return to this plane I was given help in the form of other souls that could assist me in my journey back. They remain both in me and on the other plane at once, always there keeping me strong.
When I died again in the VA hospital during surgery and then in recovery, I was given reinforcement of what I had known before and a strengthening of the connection.
It is truly hard to imagine being there and here at the same time when there is no time or space on that plane and we are relegated to existence here in lockstep with the physical world. The two planes are real but do not touch. They pass through each other like a wave on an ocean.
I often laughingly consider the idea of dark matter and that the other planes may well be what we detect.
Here are a few of the paintings that have come to me lately. 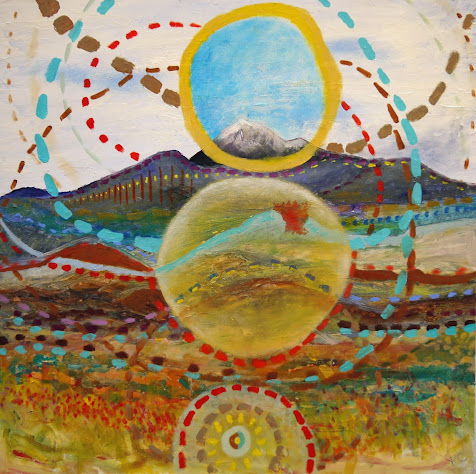 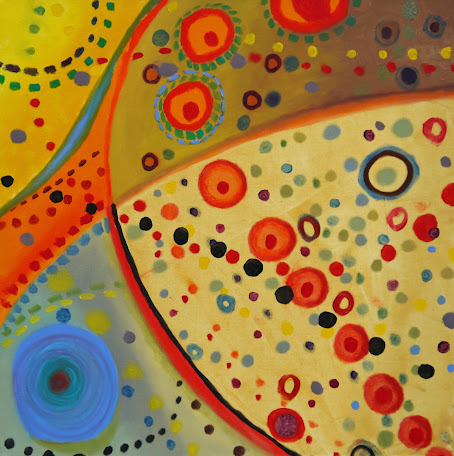 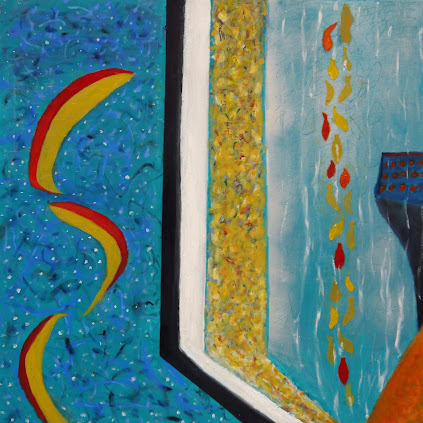 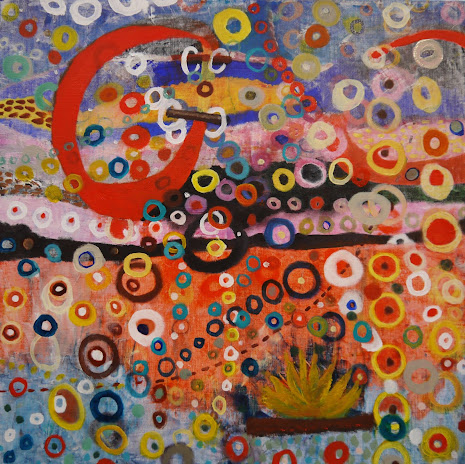 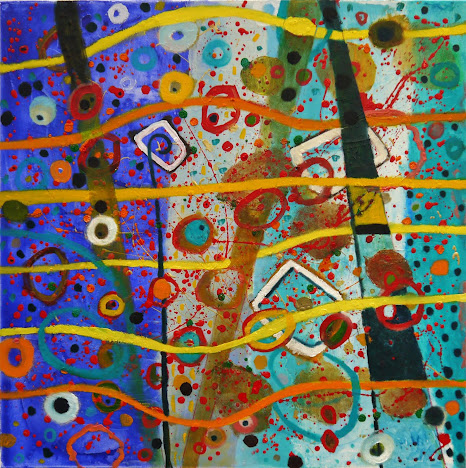 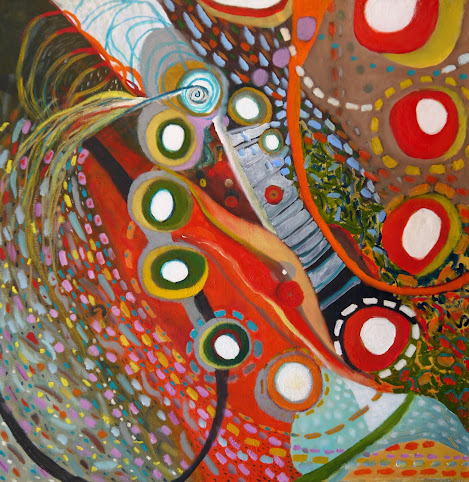 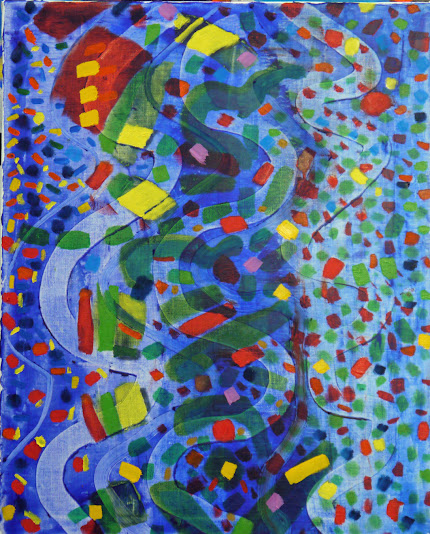